The Truth About Vitamin C

For decades consumers have been bombarded with marketing material, articles and speeches with claims that vitamin C is the supreme immune booster which could stave off colds and flus or minimise their duration and severity: 'Save a fortune on health insurance by simply popping a pill!' When research began to tackle the subject in the 1970s, the emphasis was shifted from the actual vitamin C element to the bioflavonoids (secondary metabolites in plants) found in some orange juice products or in actual fruit (including oranges). But just how effective are these bioflavonoids in respect to how they’ve been marketed to us?

Marketing is the system by which a company targets a message to a particular market in a way that’s most likely to result in the purchasing of the product or service. As consumers became increasingly literate and communication became a bustling industry all on its own, people were able to conduct their own research and ask friends what they had thought of the product, so how did a less-than-reputable product continue to draw huge sales figures?

We may consider ourselves savvy consumers today, but are we really? During the 1920s – 1950s, it took the scientific community hammering the message through to government bodies before action was taken against marketing tactics that were otherwise known to be false. What’s this got to do with oranges? The health industry is arguably one of the industries that’s most plagued by hearsay and propaganda.

What vitamin C is actually proven to do?

- It's important to the prevention of scurvy.

- Assists the body in the absorption of iron from foods.

And that’s vitamin C. So what about all those other miracle effects it’s supposed to have? Those that show some basis in reality are actually from other minerals found in the fruit itself, things like antioxidants and bioflavonoids. Typically, these elements are not found in a vitamin C tablet unless specifically stated.

Vitamin C has virtually no impact on the immune system

Shocking but true - which is probably why your health insurance company doesn’t test your vitamin C intake! This article takes a critical look at a collection of formal studies conducted by recognised scientists following the accepted Scientific Method. It summarises some research studies conducted on the impact of vitamin C. The data was collated by Dr Charles W. Marshall, a biochemist (in his book ‘Vitamins and Minerals: Help or Harm?’) which won the American Medical Writers Association award. These findings stand since the last one in 2001 – and remain the accepted scientific fact.

One of the most glaring observations is that vitamin C is near useless for colds and flu. The studies prove, beyond a doubt, that regular intake of the nutrient does not in fact prevent or reduce the occurrence of colds and flu. High doses of vitamin C during a cold or flu show only the tiniest, occasional benefits, literally only shaving a few hours off the average duration and having no impact on the severity of the illness. Another observation is on the placebo effect. People say ‘Well I took vitamins and recovered from my flu in three days’ – excellent, except for the fact that this is the standard recovery time anyway!

So where did we get the idea that vitamin C was the miracle cure for all life’s ailments? In 1970, Nobel Prize-winning scientist Linus Pauling published a book called Vitamin C and the Common Cold in which he claimed that the nutrient could improve our resistance against colds and flus by up to 45%, but that if you didn’t get these results you just needed to take more. And so the vitamin C supplement industry exploded. The fact that respected scientist Linus Pauling had not used the Scientific Method when uncovering these results was simply drowned out by the marketing hype.

It continues to this day with bloggers and ‘nutritional experts’ who don’t conduct any valid research. Are they simply repeating long debunked theories with little or no basis? How is it that we’ve been conditioned to believe the this kind of ‘false advertising’? It’s called semantics.

When you look at the label you assume the vitamin C is the active ingredient boosting your immune system – but the brand doesn’t actually claim this. There are a number of nutrients in most of these products, with evidence to support a fractional improvement to immune support.

So, where to from here?

Oranges, and to a lesser degree orange juice, as well as many other fruits provide nutrients which are essential to our survival. Vitamin C in particular is not something that the human body can make on its own; it must be obtained through diet. This is easily done by including just a bit of fruit in your diet, which doesn’t need to be oranges. In fact, in a list on the website www.scienceofmom.com, oranges rank sixth in The Top 5 Fruit and Veg by Vitamin C Content. Yellow peppers, red peppers, kiwi, green peppers and cooked broccoli all rank higher than oranges (as pictured in the infographic below). 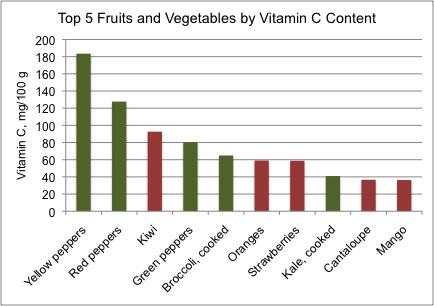 If you’re not eating any fruit or drinking juice then it’s probably a good idea to take a small, cheap multivitamin once a day. Don’t waste your money trying to overload your immune system; it just doesn’t work that way. Also bear in mind that most multivitamins do not contain any of the bioflavonoids or antioxidants that fruit does; you’re better off just eating a piece of fruit each day and saving a fortune on pills and booster serums. A good medical aid and a reasonably healthy lifestyle are far more effective than miracle pills.