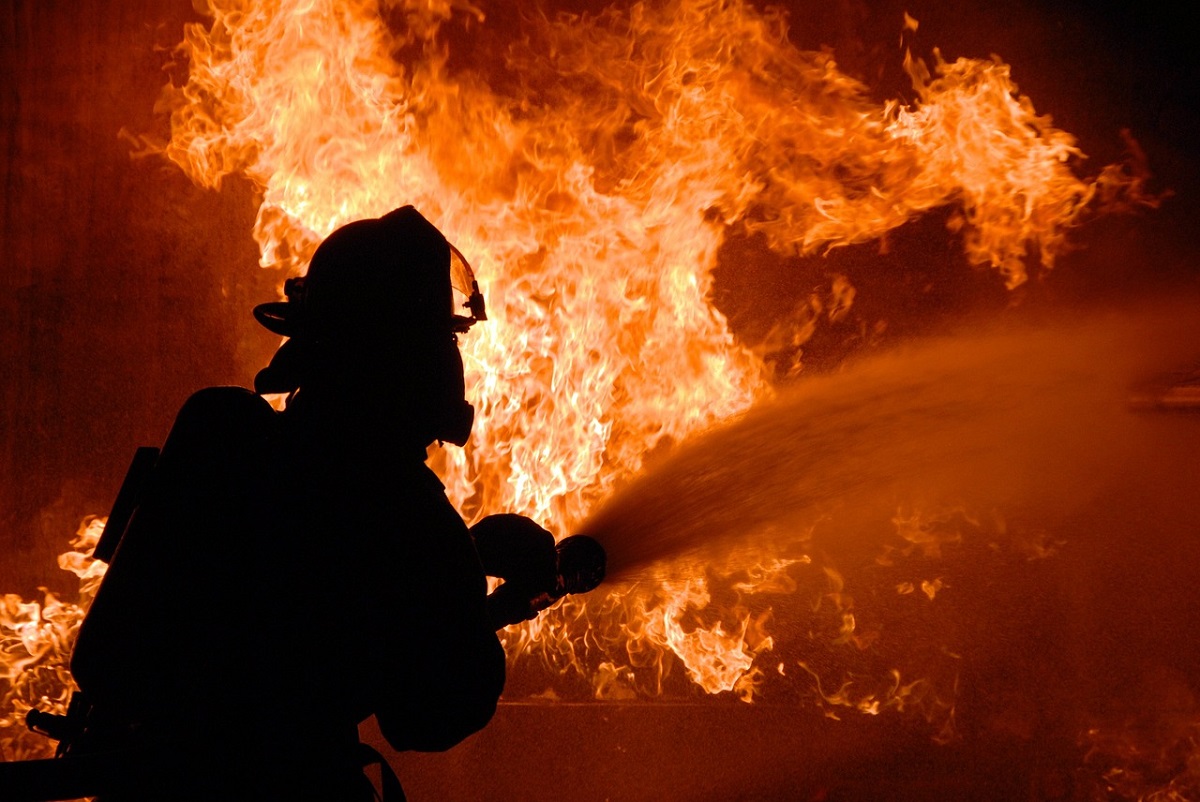 What started as an inspiring gesture rapidly escalated to controversy when the singing-and-dancing South African firefighters, involved in a firefighting operation in Canada, were sent home after a pay dispute last month. In this article, we track their journey overseas and back before discussing the implications the strike action had on the South African labour market.

Late in May, several news agencies reported that a unit of firefighters from South Africa would be deployed to Canada to assist in suppressing a devastating fire in the western province of Alberta.  The mobilisation came after the Department of Environmental Affairs' Working on Fire (WoF) programme received a request from the Canadian Interagency Forest Fire Centre (CIFFC) to contribute firefighters to support the exhausted squads already working on sites affected by the blaze. The 300 firefighters from South Africa were previously unemployed individuals from mostly rural communities recruited for the WoF's fire management services. 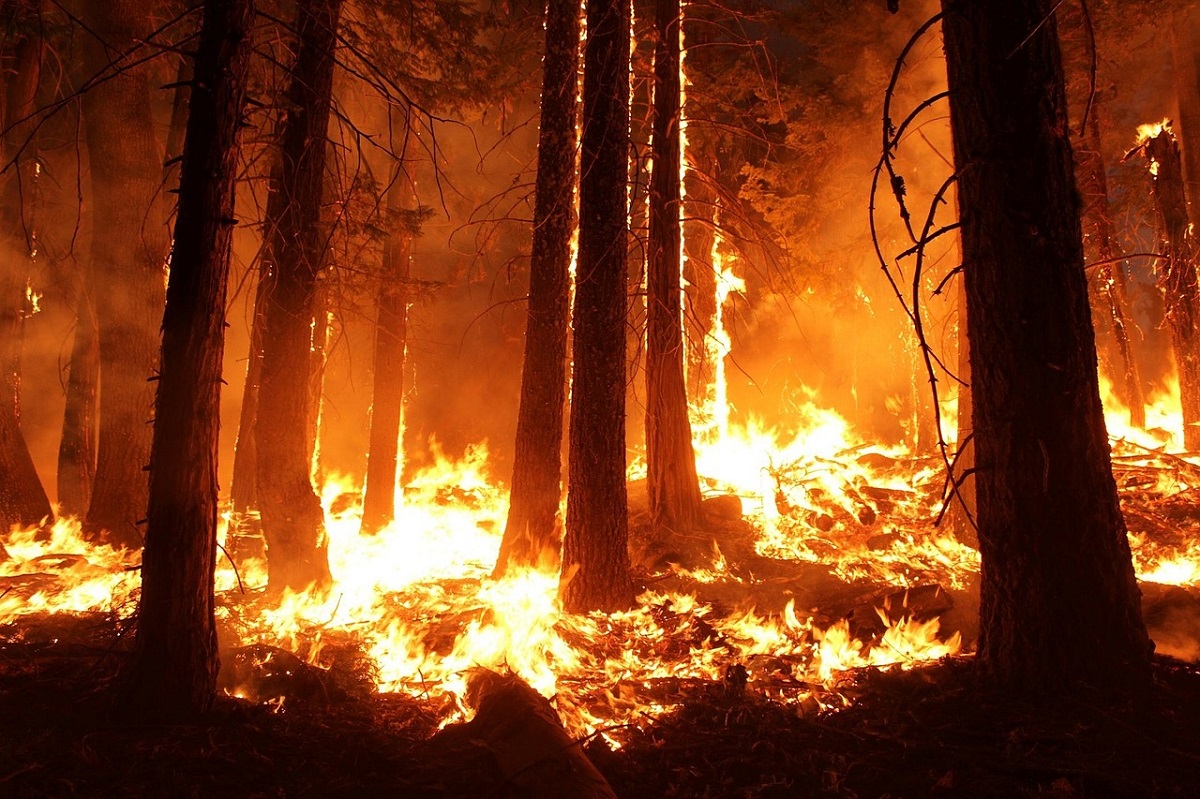 Prior to their departure, the firefighters attended a national boot camp in Gauteng. They underwent physical training to prepare them for South Africa's biggest non-military deployment to a foreign country. 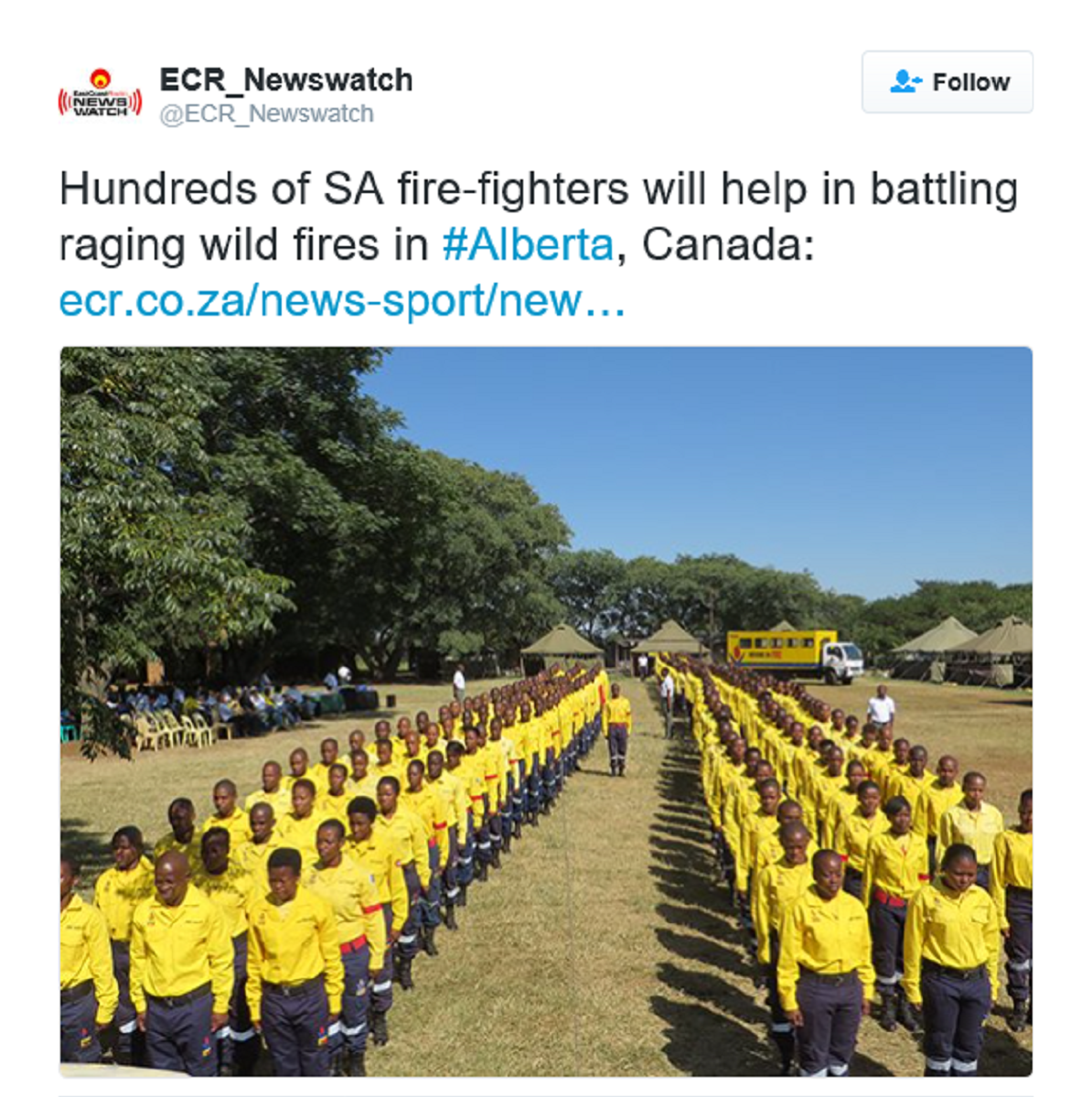 A farewell ceremony was held on Saturday, May 21, at the camp outside Johannesburg, during which the firefighters danced and sang their "morale-building" songs. They boarded a chartered Air Canada plane at Johannesburg's OR Tambo International Airport and after a 24-hour flight touched down in Edmonton that Sunday evening. 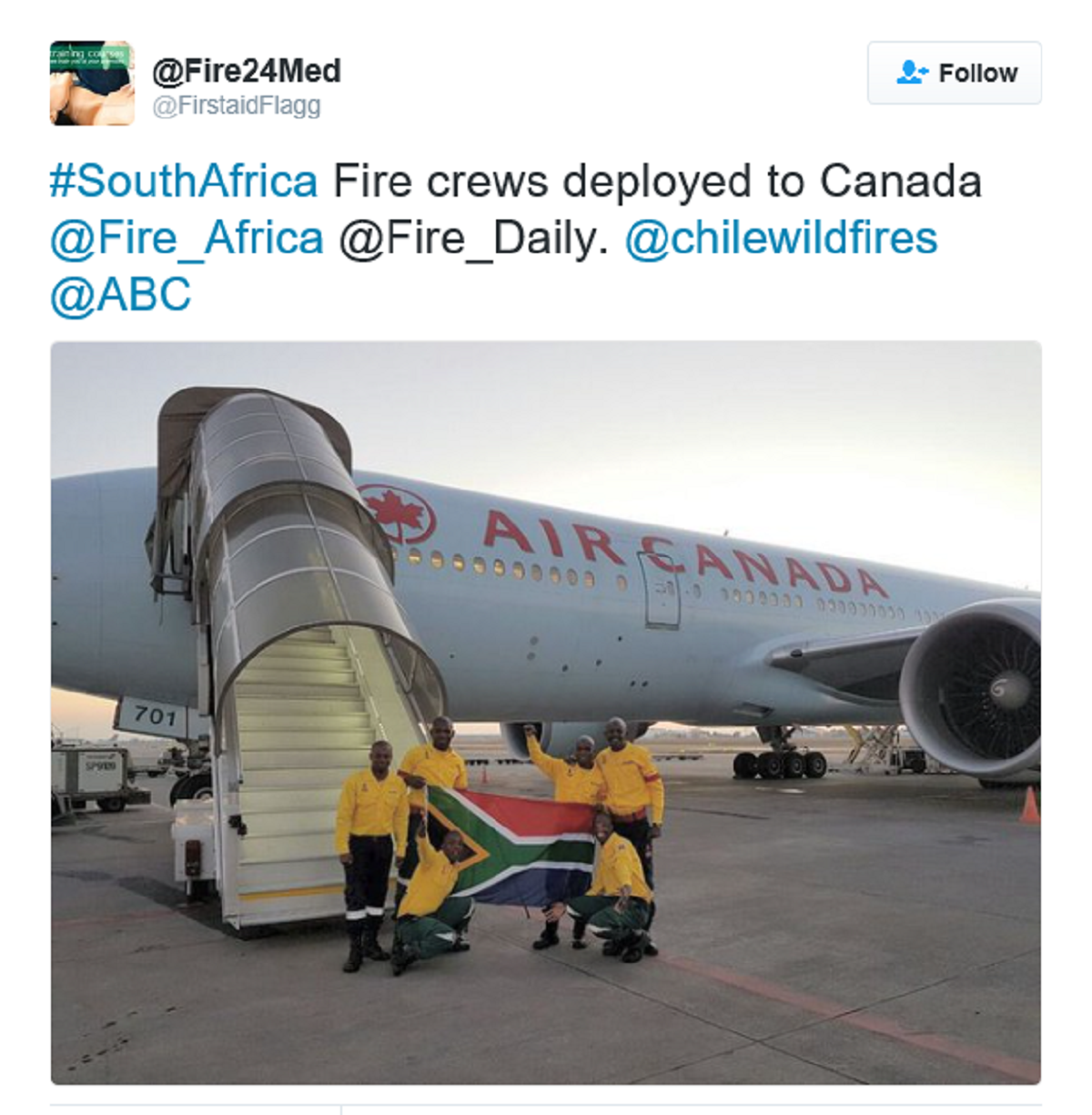 When they reached the arrivals terminal at Edmonton's airport, the firefighters burst into a traditional song and dance performance in front of welcoming locals. In the video below, their manager can be heard saying "let's give them a song". The yellow-and-blue dressed team then spontaneously launches into a medley of folk songs that feature themes of missing home and tales about a boy departing from his father to tackle the wide world.

The performance touched the hearts of many and video footage of the firefighters’ flamboyant arrival went viral on YouTube and other social channels. The incident even grabbed the headlines of international media. Canadian residents were enthralled by the South African troops, as proven by many tweets.

According to one of the South African firefighters, singing prior to an assignment helps "boost their spirits and maintain stamina in the face of hot, hazardous work assignments".

The Fort McMurray inferno damaged more than 2 000 buildings and caused over 80 000 residents to evacuate the area. About 1.5 million acres have been left smouldering. 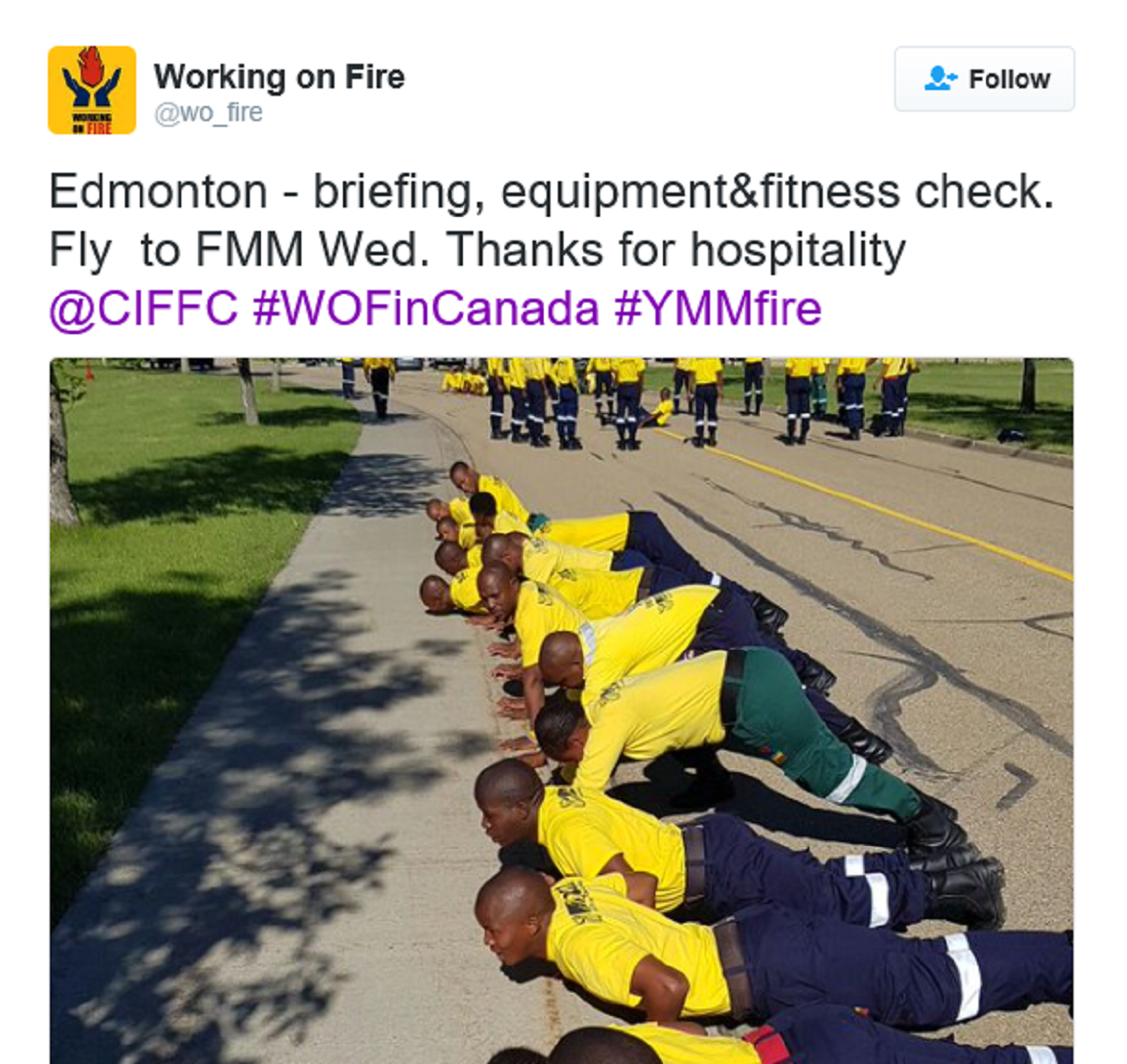 After a final briefing and equipment run-through, the team travelled to Fort McMurray where they began their firefighting efforts. It has been reported that the fire spanned about 900 kilometres, which is almost the distance between Cape Town and Bloemfontein. But even with the help of the South African firefighters, authorities struggled to get the fire under control.

Barely a week after the South African team arrived in Fort McMurray, they started to fight another kind of fire fueled by reports by South African media that they were paid $15 to $21 CAD (R170 - R238) an hour. 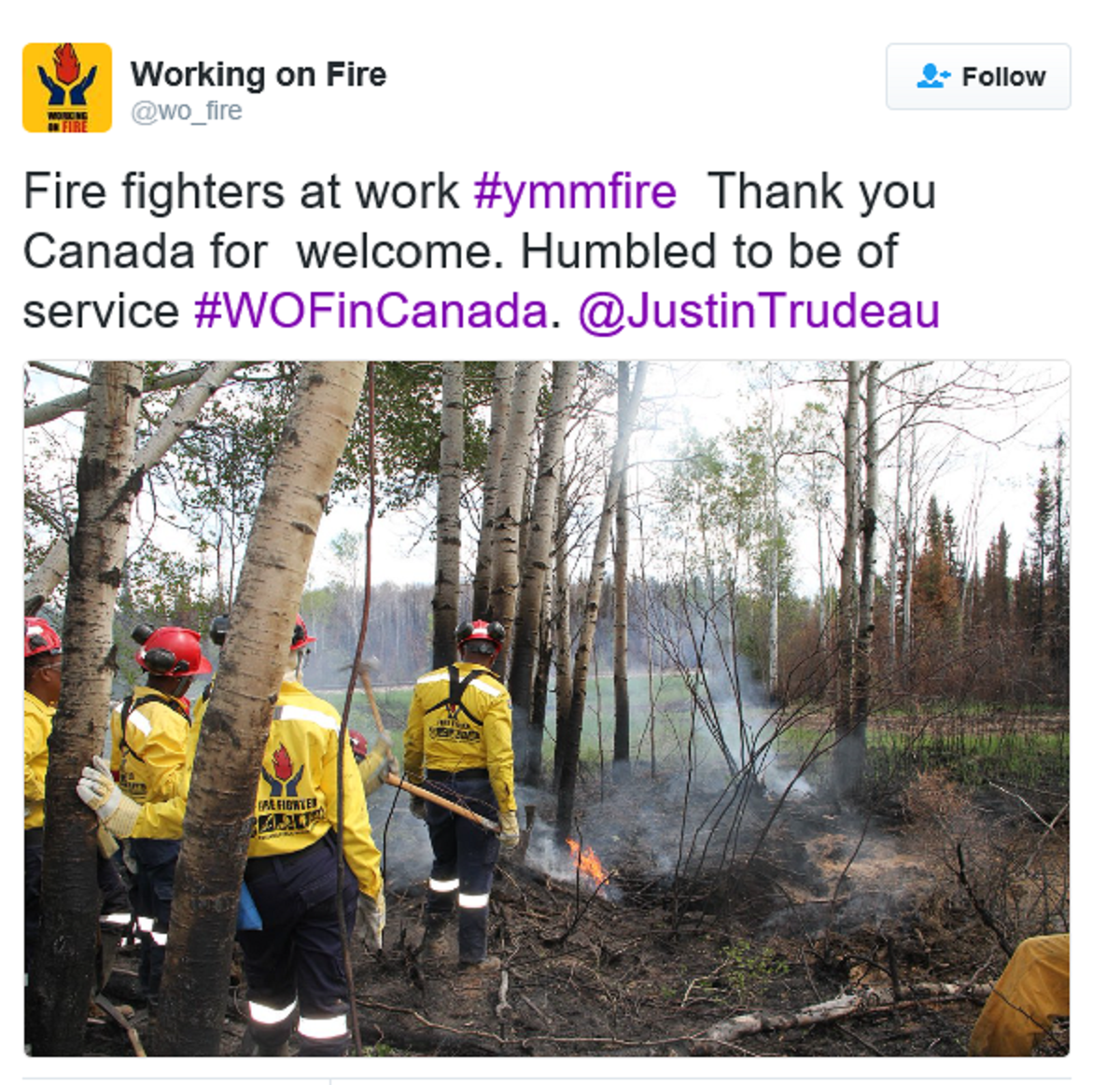 The Canadian Broadcasting Corporation, however, revealed that the South African firefighters earned $50 CAD (R567) per 12-hour workday, which calculates to about $4 CAD (R45) an hour.

The CBC’s information was derived from a contract between Canadian authorities and the WoF that stated the firefighters would earn $50 for a 12-hour day. They would have received $15 at once, and the rest within 6 months after they returned to South Africa. The Canadian government paid for their accommodation and meals.

Although the basic wage in Alberta is $11.20 (R127.20) per hour, the $15 was meant as a daily stipend outside Canada’s minimum wage laws. But, Alberta’s Premier Rachel Notley believed that the contract did not offer a reasonable wage. She upheld that the firefighters should have received the minimum wage.

As a result of the pay dispute, the firefighters promptly withdrew from the operation on their fifth day in the field. 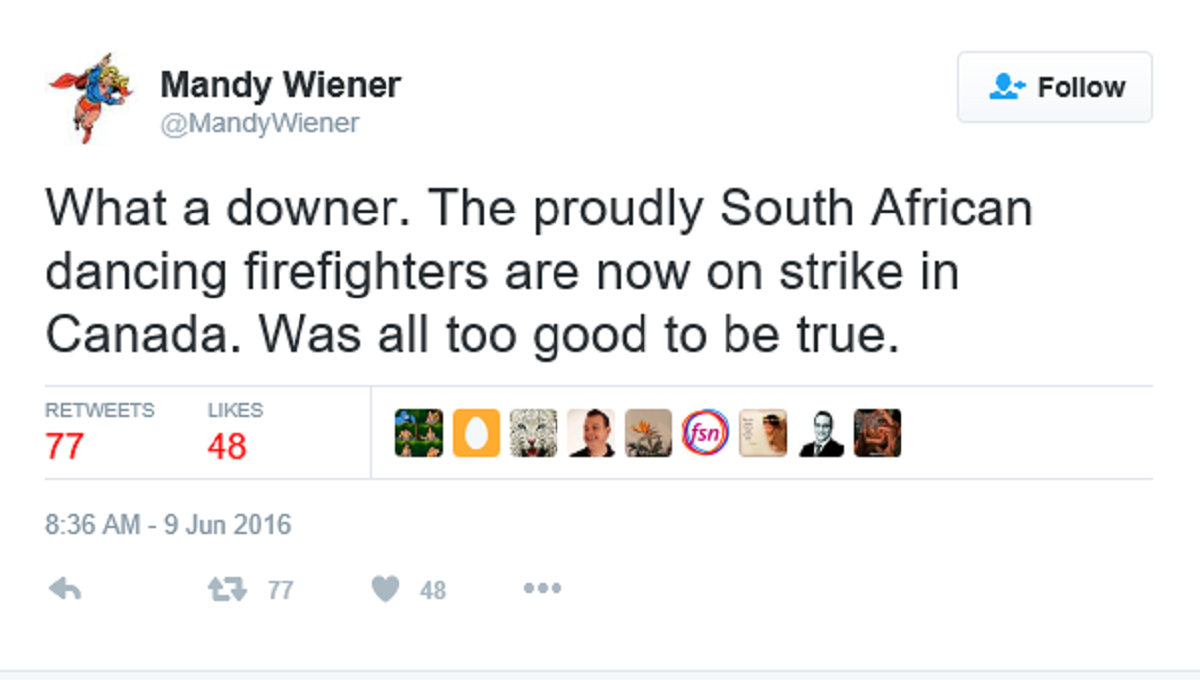 Following the strike, President Jacob Zuma asked Environmental Affairs Minister Edna Molewa to step in. The Minister sent a mediator from WoF, as well as South African High Commissioner, Membathisi Mdladlana to Canada to resolve the issue. But, after negotiations failed, the Canadian government requested the team of firefighters to leave the country. It is now understood that the firefighters returned to South Africa as they were no longer needed. Several reports stated that heavy rainfall helped to put out most of the fires.

In response to their demobilisation, WoF released a statement on 14 June. Here are some key points that explain how the money they received from the Canadian government was divided:

When adjusted to the local cost of living, WoF concluded that the firefighters working in Alberta got paid more than the standard Canadian firefighting wages.

"I think what happened is they were working side-by-side with the Canadian firefighters and they compared their wages by the dollar and not living costs in the country," commented WoF chairman Johan Heine.

In the wake of accusations of "ruthless exploitation", the South African government announced an investigation into Kishugu Holdings, the parent company of WoF who seemed to be the biggest benefactor of the Canadian agreement.

Many local trade unions have also gotten involved. They pointed fingers at the local government for what they believe is backdoor privatisation. Fighting on Fire (FoF) is a division of Kishugu, who received a tender from the government’s Expanded Public Works Programme (EPWP) to recruit unemployed youth to fight wildfires.

The unions concluded that the South African government has undermined the wages and conditions of local government workers and severely compromised the local trade union movement. They say that emergency rescue services should be a matter of wellbeing and not profits.