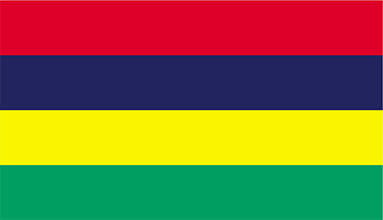 Mauritius and its people will charm and delight you because every experience is a chance to meet a friendly face. The small island is located off the south-east coast of Africa and offers a compelling beauty that will have you returning to its shores time and again.

The island of Mauritius, along with the nearby islands of Réunion and Rodrigues, was created after underwater volcanic eruptions occurred around eight million years ago.

Mauritius is a religiously diverse nation with Hindi having the largest proportion of followers (about half the population), while the remainder of the country is mostly Muslim and Christian, with a small number of Buddhists too.

The island was the home of the now-extinct flightless bird, the dodo. Through hunting and the introduction of predatory species to the island, it was driven to extinction by the end of the 17th century.

Must-Know Travel Facts About Mauritius
Currency: Mauritian rupee (MUR)
Official Languages: There is no official language in Mauritius, but the country is linguistically diverse. English and French are the languages used in education and parliament, but the majority speaks Mauritian Creole.
Capital: Port Louis
Climate: Mauritius has two distinct seasons:
Rainy: Between November and April average minimum and maximum temperatures range from 19 - 30 degrees C.
Dry: Between June and September average minimum and maximum temperatures range from 16 - 25 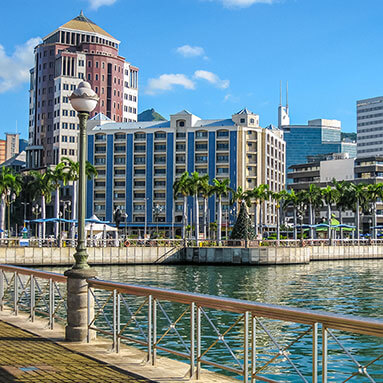 Port Louis is the country's economic, cultural, and political centre, and its most populated city. It's also home to the biggest harbour in Mauritius (the Port Louis Harbour). Here, large businesses and small traders co-exist, forming the distinctive buzzing atmosphere of Port Louis.

Down the bustling boulevards, you will see motorcycles, cars, and buses, and along swarming streets you'll encounter fashionably dressed locals.

Make sure you visit the Port Louis Central Market, the oldest bazaar on the island, which offers loads of local fruit and vegetables, spices, crafts, and meats.

Arab sailors were the first people to set foot on the island, right before the 11th century; however, they did not inhabit it. When Portuguese sailors came upon the island in 1510, they established a base but did not settle on the island. When the first Dutch sailors landed in 1598, they established a colony there. It was during this time the island became known as Mauritius, named after the Dutch prince Maurice van Nassau. The Dutch introduced sugar cane and deer, among other things, before leaving in 1710 to find another settling place. Just five years later, the French occupied the island and renamed it Isle de France. The harbour of Port Louis was built under the French governor, Bertrand-François Mahé de La Bourdonnais. The French held the island for just under 100 years, after which the British conquered and occupied it and reverted the name to Mauritius. The majority of French settlers remained and kept their customs, language, and laws. 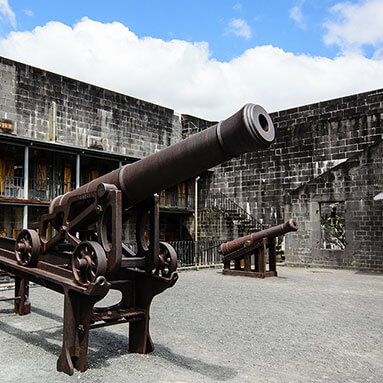 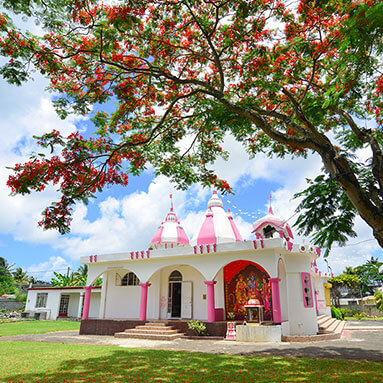 A great way to get your bearings when you first arrive is by visiting the top of Signal Mountain, one of the most recognisable landmarks in Port Louis. It provides magnificent panoramic views over the city and is just a short walk to the peak from the nearby car park.

The Chamarel Dunes, also known as the Seven Coloured Earths, are among the island's oldest tourist attractions. They are an astonishing geological phenomenon – multi-coloured dunes consisting of red, brown, green, violet, yellow, purple, and blue hues. The sands developed their colours when decayed volcanic rock resulted in soil with a high content of iron and aluminium. The shades of colours are the result of the molten rock cooling at different temperatures. It is not possible to walk on the dunes, but you can get a good look from viewing platforms. Snap the perfect Insta-worthy pic at sunrise or sunset.

The Tamarind Falls is a series of seven cascading waterfalls that terminate in a deep-water pool dug naturally out of rock. You can traverse these waterfalls by canyoning, which involves jumping, abseiling, swimming, and more.

Accommodation in Mauritius is tailor-made for every traveller's needs. You can choose from small to medium sized hotels, charming villas, and luxury resorts.

Grand Bay is a touristy hub with a lively nightlife and a breathtaking beach. This village is in the north, about 73 km from the airport. There, you'll find top-notch local and international cuisine, quaint souvenirs and gifts, and the gorgeous La Croisette shopping mall.

Pereybere Beach is small, only about 150 metres long. It's a five-minute ride or a 30-minute walk from the centre of Grand Bay. Near the beach, you'll find hawkers, restaurants, internet cafés, and boutique stores. Usually jam-packed with people, this little tourist hub offers easy access to ATM/cash points and supermarkets.

Further from the bustling life of Grand Bay and Pereybere Beach is the quiet Mont Choisy. It's about 65 km from the airport and is ideal for those who need a peaceful, intimate getaway. The beach there is the highlight of the village and is frequented by locals and tourists. It is among the longest beaches on the island and is flanked on one side by prolific casuarina trees and crystal-clear water on the other. 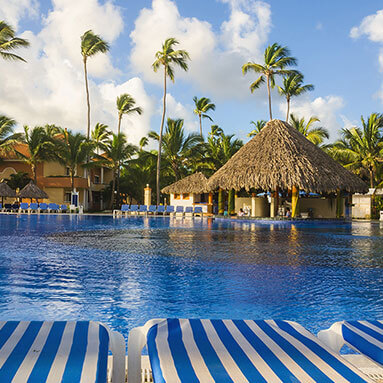 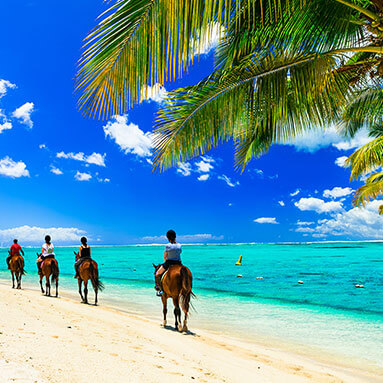 You will find many exhilarating activities to spice up your Mauritian holiday. Hike at sanctuaries such as Ile D'Ambres or enjoy mountain biking, river trekking, canyoning, zip lining, or a combination in action-packed trips such as the Via Ferrata Circuit. Visit the Yemen Natural Reserve to climb wooden ladders and cross the 350 m Nepalese bridge.

Mauritius has a classic tropical climate with warm weather year-round. The perfect time to visit is between May and December. During this time, the weather is sunny, cool, and dry. It is not advisable to visit during the wet cyclone season from January to March and consider avoiding the east coast in July and August when the wind is at its strongest. 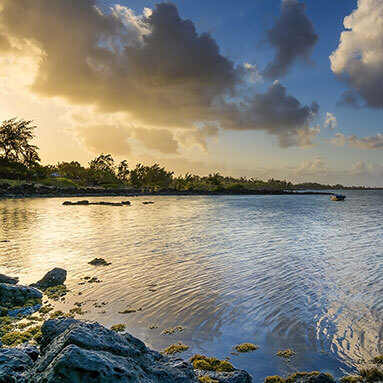 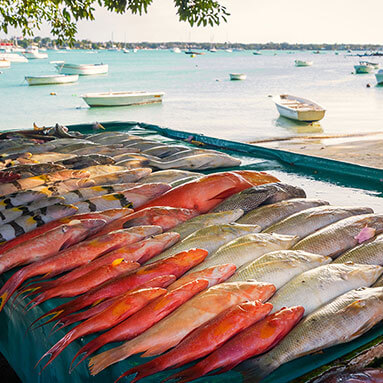 One of the best ways to experience the island is through its food. Mauritius is famous for its exciting street food scene where you'll find excellent Creole cuisine which includes Rougail, a very spicy tomato sauce with vegetables or fruit cut into pieces. Over the years, Chinese, French, European, and African migrants have settled on the island, bringing with them the flavours of their homelands. Wandering through the streets of Port Louis, you will be greeted with some familiar and some downright bizarre dishes. Many Mauritian dishes are served with chilli, so be sure to say, 'no chilli!' if you do not like hot food.

Crime and Safety in Mauritius

Mauritius is generally safe. Crime rates are low and what little crime there is tends to be petty theft. As with anywhere, it can get a bit more dangerous after dark. Avoid the beach and secluded areas at night and keep your valuables securely locked up at your accommodation.

Tourists are at risk of chikungunya, a virus spread by mosquitoes, especially during the warmer months. In addition, protect yourself from venomous stonefish stings in the water by wearing good reef shoes. These fish are not common, but their sting can be fatal. Seek urgent medical care if you are stung. 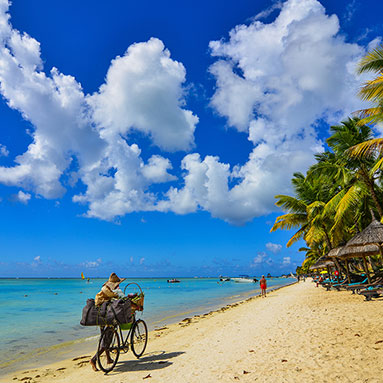 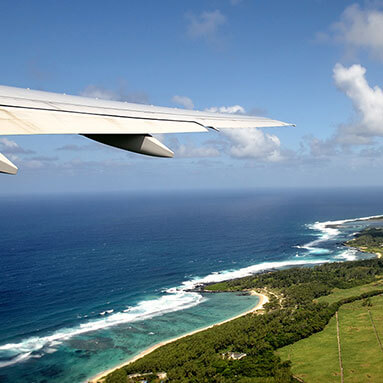 Travelling to and in Mauritius

Mauritius is accessible by plane or boat. Below are the various ways you can enter and travel around Mauritius:

Mauritius, located about 3,075 km from South Africa, covers an area of 2,040 km2. The only way to get to Mauritius from South Africa is by plane or ship. South African nationals do not need a visa, but their passports should be valid for at least six months after the dates of their planned trip.

The main airport is the Sir Seewoosagur Ramgoolam International Airport, located about 48 km from Port Louis. As with any holiday destination, it is recommended that you get travel insurance to cover the costs of medical problems as well as theft and loss of valuables.

In South Africa, cruises to Mauritius are from Durban to Port Louis Harbour. Most cruises allow passengers at least one full day to explore Mauritius, but some do allow two.

If you want the freedom to explore the island at your own pace, you can rent a car. You don't need an international driver's license; you can use your domestic license for up to four weeks. Many car rental companies also offer a chauffeur service if you prefer.

Scooters are another great way to get around and their flexibility means you're less likely to get stuck in peak-time traffic. It's a great way to take in all the sights, smells, and sounds as you ride past sugar plantations, temples, mosques, and markets.

You can also easily get around with taxis, all of which have a yellow 'taxi' sign on top indicating their route. Taxis are available at the airport, hotels, and bus stations.

Mauritius has only one motorway, which starts from the airport in the southeast part of the island and ends in the north at Grand Bay.

It is advisable to travel with Mauritian rupees only, as the rand, euro, and US dollar are not widely accepted. Exchange your currency at the airport where you will receive a more favourable rate than at the hotels. You can use your credit card at banks and most hotels, restaurants, and tourist shops – just let your bank know your travel dates before you go. Money can also be drawn from ATMs, which you'll find at the airport and in Grand Bay.

Mauritius is warm all year round, but you should still take a warm sweater and long pants. It can get a bit chilly in the evenings, especially during the off-season between April and August. Mosquitoes are a problem especially in the national parks. Make sure you pack Mosquito repellent, although you can just as easily buy it when you arrive. 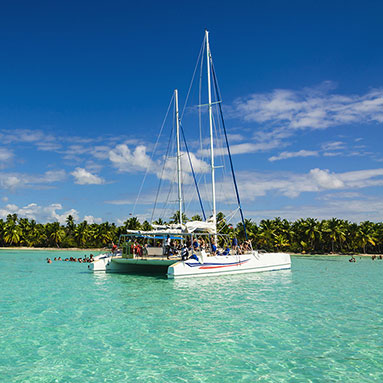 Prices quoted are correct at the time of publishing this article. The information in this article is provided for the informational purposes only and should not be construed as financial, legal, or medical advice.