Namibia is a country of limitless beauty. Expect to discover vast landscapes and stark contrasts; you'll find arid desert regions in the south and south-east and lush and fertile areas in the far north and north-east. Then there is the eastern part of the country, which is surprisingly semi-arid.

Bordering South Africa and Botswana, Namibia is a beautifully diverse country, famous for its Namib Desert running along the Atlantic Ocean coast. Namibia's population reached 2,479,713 in 2016, with the majority of the population aged between 15 and 64. According to the Ibrahim Index of African Governance (IIAG), which measures a country's ability to provide public goods and services, Namibia's overall governance ranking is #4 out of 54 countries, with a score of 68.6 out of 100.

Namibia is home to an array of wildlife, including a significant cheetah population. The country is also famous for the beautiful and unique baobab tree, well known for its appearance of growing upside down.

Here are a few must-know facts about Namibia:

Windhoek, Namibia's capital and largest city, is a bustling city with plenty to offer for the adventurous and curious. Being one of the largest and most popular cities in Africa, Windhoek is home to a mixed cultural population, various industries, and giant corporations.

The city resembles a unique blend of modern and traditional, a place where it's easy to leave your ultra-minimalistic office space and relax next to wildlife during lunchtime. You'll even find a few German castles. The diversity is endless, and you could easily spend days simply basking in the sun and drinking in the flavours of city life.

After booking your accommodation in the metropolis, venture into the city centre to explore all that it has to offer. If you're seeking creativity, the beautiful craft centre and township showcase the cultural diversity that makes the city vibrate with energy. 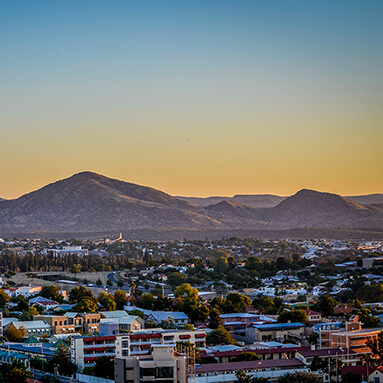 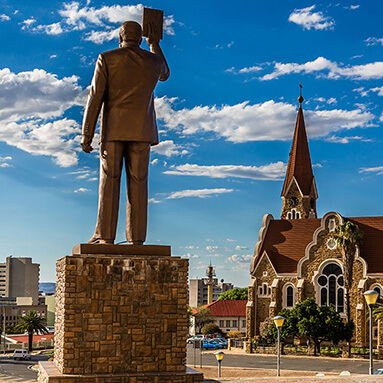 The current president and SWAPO party leader, Hage Geingob, has been at the helm since 2015. He’s followed in the footsteps of the previous president, Hifikepunye Pohamba, Namibia’s second democratically elected president, who famously won the national elections by obtaining 75.25% of the vote in 2009. Namibia’s founding president is Sam Nujoma, who was elected on 21 March 1990 and served three terms of five years each.

There are numerous destinations to experience. Namibia boasts several iconic landmarks, one them being the German Lutheran Church, Christuskirche, in Windhoek. The unusual design of the building was the brainchild of architect Gottlieb Redecker, who designed and built this masterpiece in 1907. It was constructed from local sandstone.

Some of Namibia’s many attractions include:

Sossusvlei.
Most memorable is Dune 45, a star dune found in the Sossusvlei area of the Namib Desert, and is often referred to as ‘Big Daddy’.

Fish River Canyon.
The Fish River Canyon is located in the south of Namibia and is the biggest canyon in Africa. The ravine stretches for about 160 km, is up to 27 km wide, and is almost 550 m deep in certain areas, with views and vistas that offer spellbinding beauty for those who visit it.

The Kalahari Desert.
The Kalahari is the largest sand plain in the world and is ideal for adrenaline junkies who want to lose themselves in a desert experience. Stretching from Angola to Zimbabwe, one could easily spend days travelling through the famous semi-desert.

Spitzkoppe.
This is a cluster of beautiful, bare granite peaks that are truly impressive.

Kolmanskop.
A must-see when visiting Namibia is the unforgettable Kolmanskop, now a ghost town. Kolmanskop came to be in 1908 after a diamond was found there, causing a diamond rush. The town was ultimately abandoned in 1954 after the diamond rush ended and the diamond field had been exhausted.

The Brandberg Mountain Range.
Brandberg is most famous for being the highest mountain in Namibia and can be found in the Erongo region near the Atlantic Ocean. It peaks at over 2,500 metres.

Epupa Falls.
The breath-taking waterfalls are located at the border river between Namibia and Angola and will mesmerise visitors with its massive 40-metre waterfalls.

Hoba Meteorite.
Experts agree that Hoba is the largest meteorite ever found on earth, weighing in at 50 tons! Located 20 km outside Grootfontein, it is estimated that Hoba crashed down around 80,000 years ago.

Ombalantu Baobab Tree.
Most iconic of all is Namibia’s Omukwa waaMbalantu tree as it is known by the people of Ombalantu, – a giant species of baobab found in Outapi. The tree is 28 metres tall with a circumference of 26.5 metres and is estimated to be over 800 years old.

Other attractions include Etosha National Park, Swakopmund and Walvis Bay, Daraland and Kaokoveld, Twyfelfontein, Caprivi, Windhoek, the Skeleton Coast, and the Tropic of Capricorn sign, where many tourists have posed for a photo. 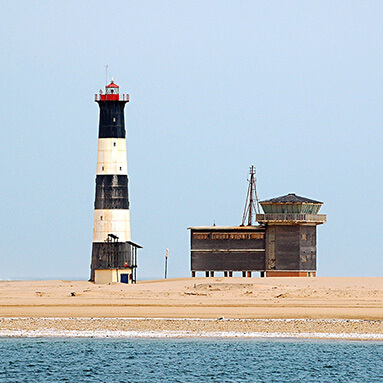 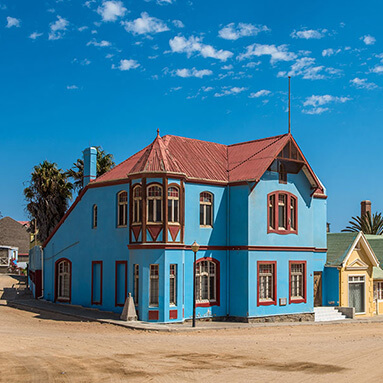 Staying in Namibia is an adventure. From camping to lodging and luxury hotels, you are certainly spoilt for choice.

Many travellers would consider the capital city, Windhoek, as their first choice for a stopover, with Walvis Bay being a close second. When looking for accommodation in Namibia, you will be glad to learn that most major accommodation services are available, although many are pricey.

For this reason, many travellers prefer roughing it outdoors. Camping is a major attraction for travellers looking to experience the natural beauty of Namibia. A quick online search will show you the best-rated camping locations.

Those after adventure don't need to look far, as Namibia offers some of the most thrilling experiences. Enjoy a dune adventure with quad bikes or experience a 4x4 trail through the Etosha National Wildlife Park where you can see a range of fauna.

You can experience Namibia's marine life up close on the Eco Marine Kayak Tours or, if you're fit and eager enough, cycle through the dunes on fat bikes.

Ground Rush adventures will help you get a different view of Namibia as you skydive over Swakopmund. 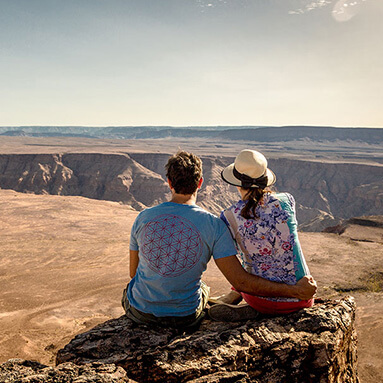 Because Namibia is mostly desert, the temperature is often very hot. The country often experiences more than 300 sunshine days per year. Namibia's winter months are from June to August and are generally dry. The summer months are from December to February and are the warmest. There are two rainy seasons, both in the warmer months; the 'small' rainy season is between September and November, while the 'big' rainy season is between February and April.

Namibia's cuisine is mainly influenced by two cultural traditions: the cookery practised by indigenous people of Namibia such as the Himba, Herero, and San groups, and settler cookery, which was introduced during the colonial period by people of German, Afrikaner and British descent.

Depending on where you are and who you are travelling with, the cuisine available to you will vary as different ethnic groups and regions in Namibia have their own specialities.

10% of the bill for tipping in restaurants is the norm. 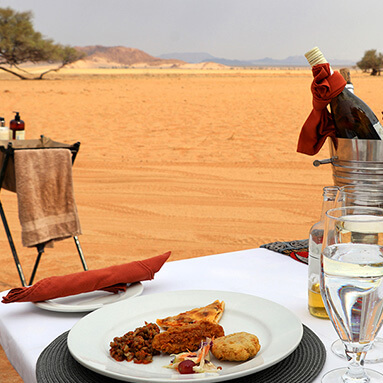 Namibia is considered to be one of the safer countries in Southern Africa, but it is not without crime, especially property theft. Getting travel insurance for Namibia is recommended for anyone looking to travel stress-free.

According to the Namibia 2017 Crime and Safety Report, non-violent crimes are on the rise, with the most common incidents involving pickpocketing, ATM theft, purse snatching, and vehicle break-ins. These crimes are more likely to occur near densely populated shopping destinations and high-traffic locations, where tourists can be found.

Although most crimes are non-violent, there are safety-related issues and concerns when travelling through the country. Ensure the accommodation you book is in a safe and secure area.

Travelling to and in Namibia

Travelling via air or sea, you’re most likely to arrive in Windhoek. The most popular ways to travel to Namibia from South Africa are by road or air, but some prefer the luxury of a cruise.

Listed here are the various ways you can enter Namibia:

If you are driving from South Africa, you are most likely going to enter through Noordoewer Border Control, located in the south of Namibia. The drive from Johannesburg will take you an estimated 12 hours and 36 min to cover the 1,217 km via the N14.

Namibia offers a range of natural landscapes that can test even the most experienced drivers. To ensure you make the most of your trip, consider renting a 4x4 vehicle. Namibia is all about venturing off-road, so your best option will be a rugged and capable vehicle.

Tip: Petrol stations are quite staggered in Namibia, so make sure to fill up each chance you get. Always ensure you have enough cash on hand to pay for your fuel, as many filling stations don’t accept card payments and many do not have ATMs, either.

As an alternative to driving, you can arrive at the Namibian coastline in style on a luxury boat. Consider taking a cruise aboard the MSC and experience the natural beauty of Walvis Bay in all its splendour.

With several major airlines offering flights to Namibia from South Africa, hopping on a plane is the easiest way to get there for many people. Departing from either Oliver Tambo International, Lanseria, or Cape Town International Airport, you will arrive at Windhoek’s Hosea International Airport (WDH), a quick 35-minute drive from the city centre. 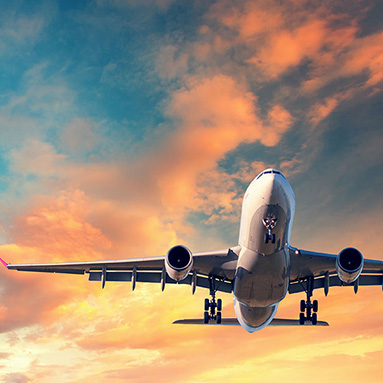 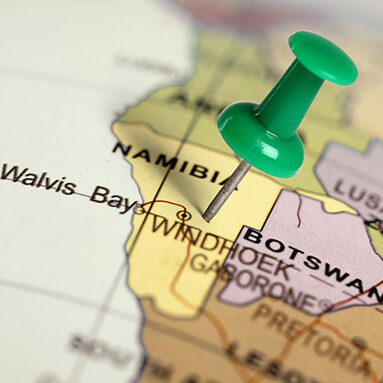