Living Costs for South Africans in the Future

Old Mutual’s Long-Term Perspective Report for 2017 highlights a frightening picture of the escalating living costs for South Africans in the next 10 to 25 years. Among other things, the report reveals how inflation will impact the cost of buying a car, getting private healthcare and sending your child to school in the near future.

Inflation is expected to put immense financial pressure on South African households over the next 10 to 25 years. According to BusinessTech, the report described inflation as “South African enemy number one”, as it makes it difficult for consumers to put away savings – which impacts everything from the spending power of the money you have at your disposal, to the real value of the money you save for retirement and the unexpected.

The report investigated how much the prices of some South African favourites have gone up in the last few decades compared with today’s prices. According to the report, twenty years ago you would have paid only R292 to fill a food trolley, and a mere R5 eighty years ago. And ten years ago, you would have paid R538 for a trolley of consumer goods that would cost R1 000 in today’s terms. 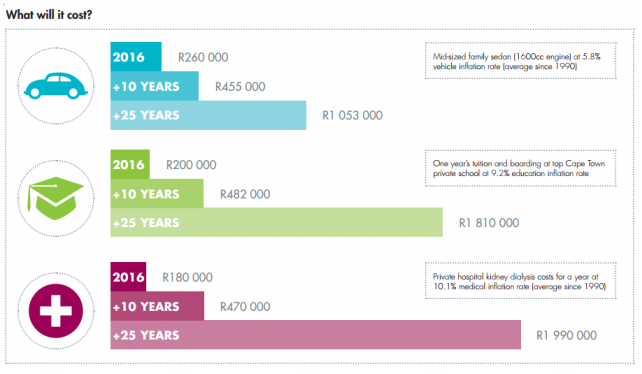 It is also projected that buying a vehicle will become more expensive in the future. A mid-sized family car that you will have paid R260 000 for last year will cost R455 000 in 2026. According to the study, the same car could cost South Africans R1 053 000 in 25 years’ time. Healthcare costs are also expected to soar in the near future. According to the report, at the current 10.1% medical inflation rate, it will cost R470 000 for a year’s worth of kidney dialysis at a private hospital in 2026, which is way over last year’s rate of R180 000.

The most important warning from Old Mutual’s Long-Term Perspective Report, however, is that inflation will have a tremendously adverse impact on your retirement savings. “If your retirement income does not at least grow in line with inflation, you will either experience a decline in your standard of living or you will run out of money,” the group said.

Old Mutual said the instability of inflation is a huge challenge for budgeting, which means South Africans need to save more for the future if they want to keep standing. You need to ensure you are saving enough money for your retirement, and other living costs such as your child’s education for the near future or you might end up having to rely on a Personal Loan to cover high living expenses in the next 10 to 25 years.