Experts Advise How to Cut your Electricity Bill

In South Africa our poor energy infrastructure has cost us dearly, and continues to do so. According to a savingenergy.co.za article, the price hike this July was even higher than originally intended, “so that Eskom could recover more of the money they lost due to poor operational management – for that ineptitude, we have to pay - and continue to pay.”

Hippo.co.za conducted a series of talks with some of the top energy technology suppliers and experts in the country to investigate DIY and affordable technological innovations. A few of these tips combined could help you, the consumer, save a great deal of money on an accumulative basis – just remember to check that your building or home insurance covers DIY tinkering before you begin. 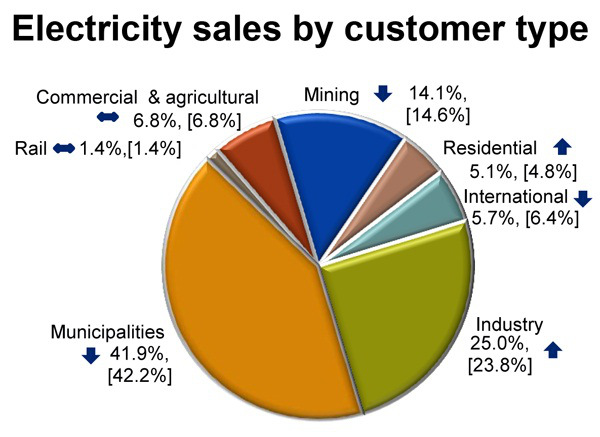 Which devices use the most electricity?

Gavin-Andrew Froneman is the director of Monarch Climate Solutions and an affiliate of the eco-friendly site lovetostay.co.za

He says, “Before I recommend renewable / efficient energy technologies to someone I always ask them if they know why they're consuming electricity and if they're aware of how much they are consuming? We all know the saying "knowledge is power" and you'll be surprised to know how little people really know about how much they're consuming and why.

So the first and foremost energy hungry contributor to your electricity bill, is you.  We have a barrier between ourselves and our utility bill since we only receive a figure at the end of the month with no transparency or explanation when the figure fluctuates. Therefore we have no way of knowing how much energy we are consuming and wasting.

The estimated demand on our grid at the moment is 6% but it's still not a very good indicator of how much we are really wasting; so the first step is to know thyself.” 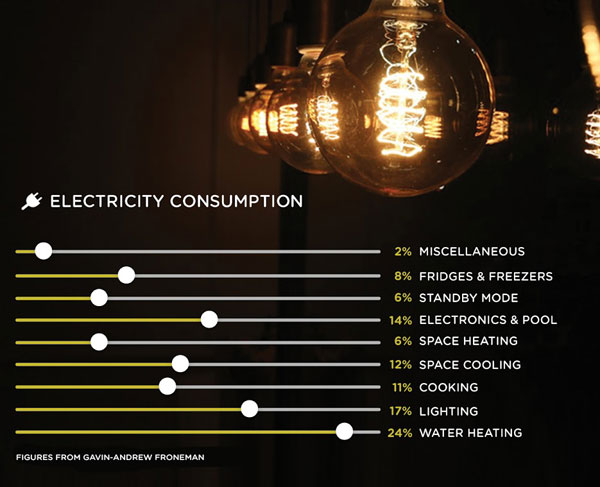 Cyrielle Vaucois and Sebastien Lacour of Powertime are experts in new technology and how it can cut down your monthly power bill.

“Research has shown that better understanding of your household's personal energy information is likely to save you 5 - 15% on your monthly bill, whether you are using prepayment or receive electricity bills,” say Cyrielle and Sebastien.

“The potential impact of large numbers of people achieving similar efficiencies also significantly contributes to the South African Energy Conservation Program, which aims at lowering the risk of power outages returning. For every ten households that save 10% on electricity, for instance, we reduce carbon emissions as much as taking one conventional car off the road, and we contribute to decreasing the need for Eskom to build expensive coal fired power stations.”

Daryn Stewart of Jadelee Electric weighed in saying, “Energy efficient alternatives have been available for some time and with every price increase they look more worthwhile, as energy efficient alternatives can make a major difference in your weekly power consumption. Not only do they save you money at the end of the day but they also relieve strain on the grid, and this means less load shedding.”

How does our country compare to others?

Craig Berman of savingenergy.co.za says that, “South Africans are a ‘reactive’ consumer group rather than a ‘proactive’ one. We tend to look for solutions AFTER a price increase or load shedding, rather than before. We also tend to prefer short-term, lower cost solutions to looking at a medium to long-term option.

I would say that compared to global benchmarks we are probably behind, however, this would be compared to 1st world nations such as those in Europe and the US. We are also less aware of the greater global impact of energy efficiency such as reducing CO2 emissions – few consumers actually know what their household CO2 emissions are based on the usage. South Africa has one of the highest CO2/Kwh (kilowatt-hour) ratios in the world at approximately 1kg CO2 per Kwh!”

Wim Jonker Klunne of Microhydro says “South African households are typically not seen as very energy efficient. We do not have a tradition of saving energy as, for a long time, electricity was actually very cheap. With the recent price increases of Eskom households start to look at ways of saving energy.

It is very difficult to say how much a typical South African household spends on electricity, as that very much depends on the number of people in the household and the level of electricity consumption. Eskom uses a typical consumption of between 750 and 1100 kWh per month per household.”

Happily there is hope, in the form of new technology and improvements that you can make around the house.

Six Ways to Save

Gavin-Andrew Froneman says, “Since each household is unique, a very good place to start is to find and install a reliable energy management tool. My favourite is carbonTRACK who just won the Innovation Hub awards last year and see no reason why they shouldn't be a household name in a few short years.”

“Lighting can contribute up to 10% of your monthly electricity bill and switching off lights in unoccupied rooms could make a small difference at the end of the day,” added Daryn Stewart

Sandy Ueckermann of TSiBA Eden, an initiative for community training, states that, “In February 2014 the students put up a simple black PVC pipe for heating water [the pipe heats under the sun outside and cycles hot water on demand] to wash their own dishes with after every meal, or their clothes.

The practice of installing this very simple technology inspired a number of them to do the same in their homes. This is an inexpensive and easy to implement project that is transferrable on and off campus situations, saving on electricity or gas.”

“Any household should start with a change in behaviour: switch off and unplug all appliances when you are not using them, leave nothing on standby mode, switch off lights that you are not using, only use hot water for cleaning tasks that really need it, reduce hot water consumption by taking a shower instead of a bath, etc,” observes Wim Jonker Klunne.

Craig Berman recommends you change your standard light bulbs to compact fluorescent or LED, install LED floodlights instead of halogen and make use of geyser and pool pump timers. “The most important element of all of this is the will of the consumer to actively and consciously want to reduce their energy usage and carbon footprint.”

Cyrielle and Sebastien advise that you “not set your fridge temperature colder than necessary. Set your refrigerator between 2°C and 5°C and your freezer between -20°C and - 22°C. Have your fridge and oven serviced if they’re more than a few years old – leaking seals waste power, and a fridge re-gas will make it more efficient.

Let’s consider that a household, previously consuming around R200 worth of electricity, has installed a suite of energy saving technology, isolated the house properly and uses energy monitors.

The calculation after that depends mostly on the products used by the household but in summary installing new, affordable energy saving technology can save up to R80 per week in that example.”

From us at Hippo.co.za we’d like to thank our panel of energy experts for their detailed insights as we all try to save some money on electricity this winter. And, remember to take out the right form of building or home insurance before you start applying that clever PVC piping for super cheap solar heating which will insure you are covered in the unfortunate event anything goes wrong.