Will you be able to afford education for your children?

With steadily increasing electricity costs and unstable service delivery, rampant price hikes are occurring across various industries in the country. Load shedding isn’t the only factor but, as Times Live recently reported, it is a major one. Living in South Africa is not cheap and it’s becoming increasingly difficult every year with little relief in sight. Many South Africans have had to rely on a vetted personal loan on several occasions simply to buy an appliance or groceries for the month.

Now, add school fees to this complex economic environment. While general inflation stands at 6% - school price inflation is 10%, essentially this means that each year those school fees will seem more out of reach.  Despite Basic Education Minister Angie Motshekga’s ‘shock and anger’ over this situation back in 2012, South Africans face unabated increases in 2015.

According to a recent interview published by BusinessTech, wealth manager Chris Pretorius of AlphaWealth has said that a top rate education in South Africa will cost between R1 million and R7.7 million.  “The numbers are truly shocking given that these numbers exclude things like food, extra lessons, text books, clothes, sports equipment, medical expenses, holidays or a car when s/he turns 18.”

Public primary and high schools can now cost around R27 000.00 per year and for private schools you can roughly triple that amount. We spoke with a representative from one of the country’s foremost universities to get an idea of the challenge of quality schooling in South Africa.

The Cost of a University Qualification

Mitchell Parker of Activate, an independent student news source for Rhodes University, gave us insights and a breakdown of the university's fee structure.

“Fees for the University are somewhat above the national average, working at around R37, 200 [per year] (for a standard Bachelor of Arts) to over R48, 000 (for the final year of the Bachelor of Journalism). However, this is offset by the quality of lectures, number of on-hand staff members and excellent facilities. Classes tend to be small and most lecturers are easily accessible to students for consultations. At Rhodes, you aren’t just a student number.

The residence system, too, is considered the best in the country. With most residences' populations falling under 100 people, there is definitely a great sense of community. Costs per year for this are between R48 100 and R50 500 – all meals, electricity, water and internet inclusive.

Fees are, of course, on the rise due to inflation but Rhodes has managed to maintain a relatively low increase year on year making it much easier on your bank balance. Fee increase totals have not been released for 2016 as yet, but the expectation is that it won’t be much more than 10% of the previous year.”

Sasha Wyatt-Minter is the author of All4Women and mother of a 13 year-old. She is fortunate enough to be married to a teacher at an independent school - which means free school fees for 12 years and the opportunity to save some of that money for her daughter's university education.

“At the moment private school fees are higher than what we will be paying at university.

The fees at the boarding school where we live (my husband is a teacher) are R150 000 per year.  Parents I have spoken to are relieved when their children go to varsity.

We don't pay fees but my daughter has just written a scholarship exam and been awarded a scholarship. It will only save us the excursion and stationery costs (about R1000 a month) but we felt it was important for her to sit in an interview and write an exam - for her own life experience and self-worth.

It also depends on whether children will live at home or go away to university. I think the living expenses are the major costs of university - the tuition seems to be about the same as the annual fees at a good government school.” “The cost of tertiary education depends on the degree chosen as the cost and length of degrees vary.  For the purpose of a cost comparison, this article has chosen the following five undergraduate degrees that Tuks offers: BA (General), BCom (Own Choice), BSc (Actuarial and Financial Mathematics), BIT (Bachelor in Information Technology) and BM (MBChB). This cost comparison is based on 2015 prices and excludes possible annual increases in the cost of degrees, application and registration fees, as well as the additional cost of books. In 2015 the application fee was R300 and the registration fee was R5 000.

In addition to the cost of a degree is the cost of accommodation. Tuks offers residence accommodation. Before considering whether you would like a single room or a shared room, there is the reservation fee of R5 700. For the majority of the residences, a single room costs R34 200 per year while sharing a room decreases the cost to R31 700. Tuks also offers a catering service, which offers three meals a day at R28 800 per year.” 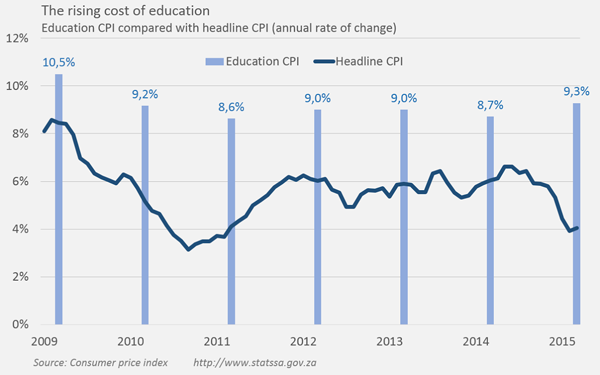 Is there a solution?

“Children are not only hard work; they can burn a spectacular, scorched hole in your wallet,” says Marc de Chazal, features editor of Child Magazine and father to a twenty-year-old daughter. “But parents who are smart will start saving for their child’s education as soon as possible, especially for high school and tertiary education, which tends to increase in cost annually by 4% above the rate of inflation.”

“One way to get a head start is to take your annual bonus and put it into an RA. Each year thereafter, top it up with the money you get back from the taxman plus the amount by which your bonus exceeds the previous year’s bonus. Whatever education plan you opt for, the important thing is to get going sooner than later. If you have more than one child, the only logical thing to do is to get going with your saving plan even sooner”, advises De Chazal.

Tamlyn Vincent, a Durban mother of a six-year-old boy in Grade R, has a revolving saving plan, which will pay for his schooling and the bulk of his tertiary education. Would she encourage her son to apply for a scholarship or bursary, even if she can afford the fees? “Most definitely,” she says. “Any money we save on his tertiary education can be invested for his future. And what’s more, he can mention having received a scholarship or bursary on his CV, which is commendable.”

Remember when planning for your child’s future to consult a trusted investment group, but if you need support with smaller, monthly necessities, a personal loan is a viable option.