The most popular science-fiction and fantasy adventurers often lead relatively intense and extraordinary lives, which is why we find them so compelling. But, saving the world from the forces of darkness does not come without risk. Not only do their pursuits jeopardise our heroes' lives, it can also have an impact on the future of their dependants.

One of the most frequently asked questions regarding Life Insurance is "who needs it?". You should have Life Insurance if anyone depends on you financially, like a spouse, children or ageing parents. But, there are some groups that need Life Insurance more than others, such as those whose everyday existence seem straight out of an action-adventure movie.

Since movie characters usually have a life lesson to learn from their journeys, Hippo.co.za asked film experts to explain why purchasing Life Insurance should have been one of them. 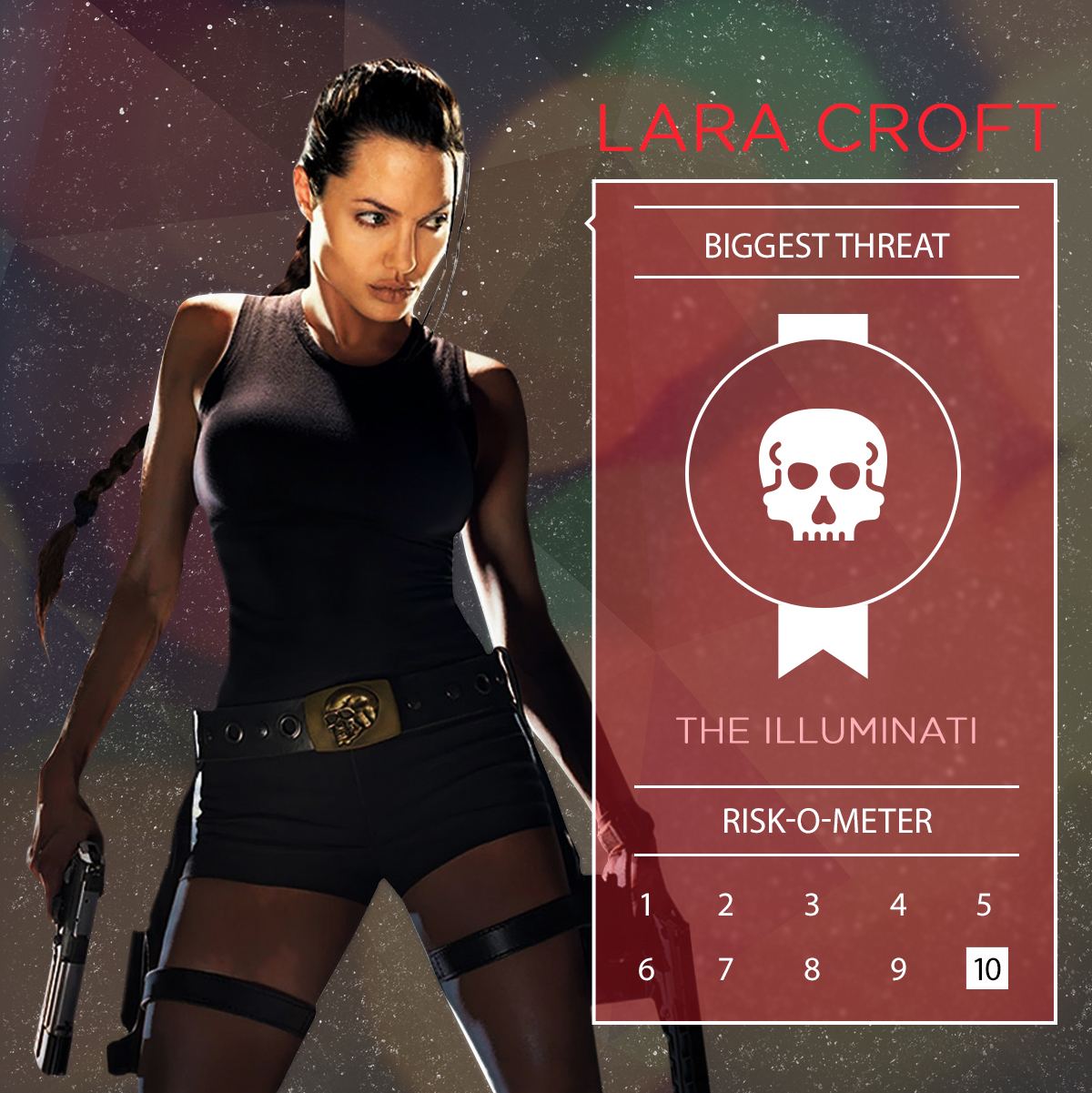 “Lara Croft is an 11th generation countess, now orphaned. She is reputably an accredited genius and Olympic-standard gymnast. Having studied Asian archaeology, she became an archaeologist/ adventurer. She has been credited with working at about fifteen archaeological sites of international significance.”

“In the 2001 movie, Lara is on a quest for the ‘Triangle of Light’ (an object of phenomenal destructive power that grants its wielder power over time and space). The object is needed by the Illuminati during the planetary alignment that culminates in a solar eclipse on Earth which happens every 5 000 years. This is a mission given to her by her late father to keep the power of the ‘Triangle of Light’ out of the Illuminati’s hands. Lara travels from Cambodia to Venice to Siberia to find the two halves of the triangle using sleigh dogs, boats, cars, parachutes and planes.”

“Lara has to fight the Illuminati, huge six-armed stone statues, temptation and her own demons (in terms of her memory of her father versus the truth) along the way.”

“Considering the level of danger involved, Life Insurance would benefit Lara Croft by ensuring her vast fortune was not wasted on death taxes. For example, the executor of her estate will require a fee on her assets, which can be up to 3%. Her estate will also be subjected to estate duty and capital gains tax (CGT) which is payable before inheritance is transferred to the beneficiaries. Life Insurance can be used to cover these costs.

Lara's legendary archaeological skills could be taught to other intrepid adventurers, perhaps by leaving a portion of her considerable Life Insurance pay out to a scholarship fund.” 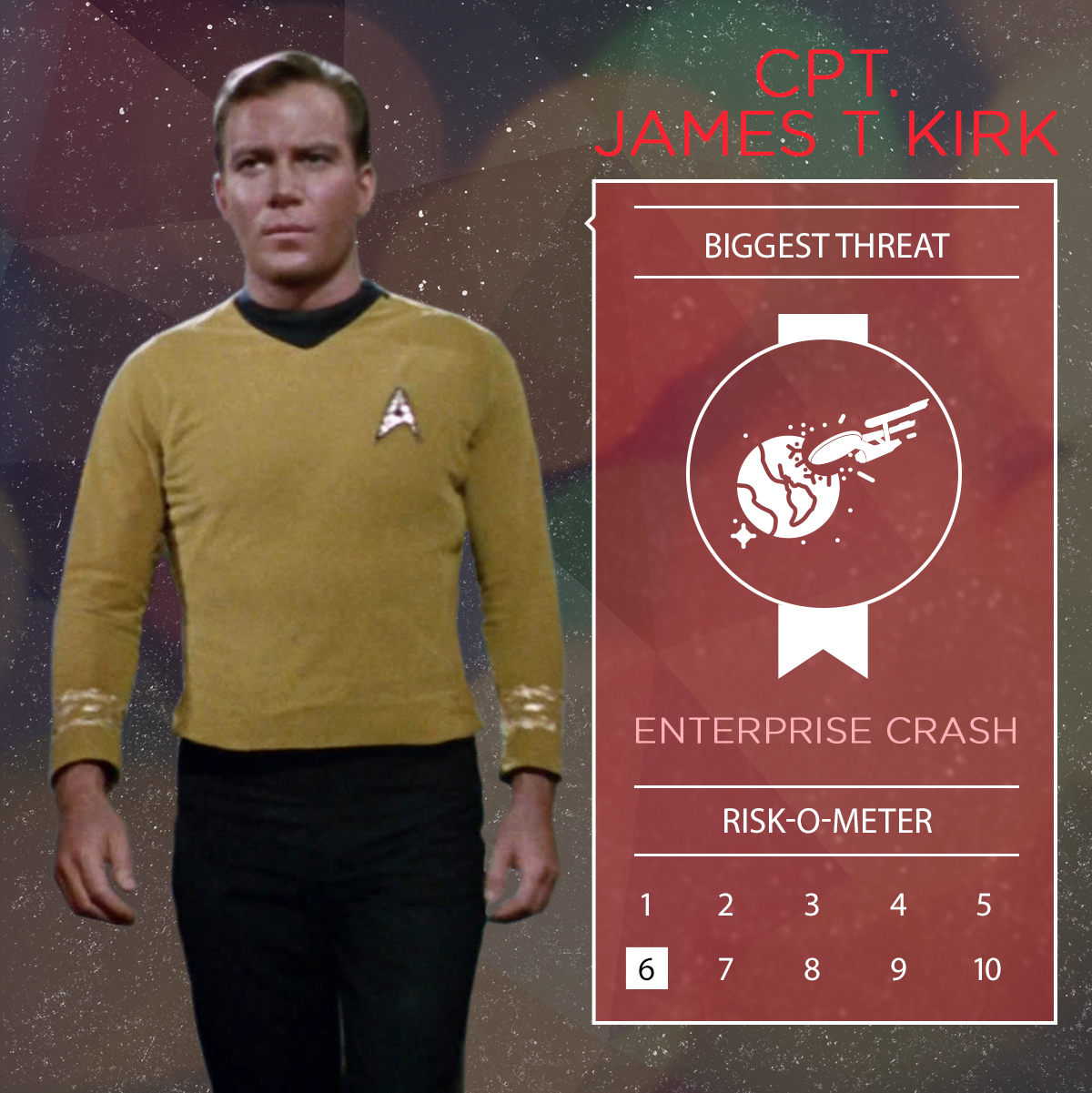 “Troubled orphan turned great leader, Kirk was the commanding officer of the USS Enterprise in the original Star Trek TV series and related spinoffs and reboots.”

“There are few places Kirk hasn't been either in space or time. But, he's best known for a five year mission to explore the universe at the helm of the Enterprise. With his crew of 428 he boldly went where no man has gone before.”

“Everything that could go wrong did go wrong for Kirk, from falling into alternate universes to fighting his best friend. When your starship is overrun by sentient balls of fluff, you know you're doing something wrong.”

“Kirk had the ultimate Life Insurance in that when the character finally died, he was resurrected for a franchise reboot. But, a Life Insurance policy would've allowed Kirk to financially provide for his former love interest Carol Marcus and his estranged son David Marcus after his death.” 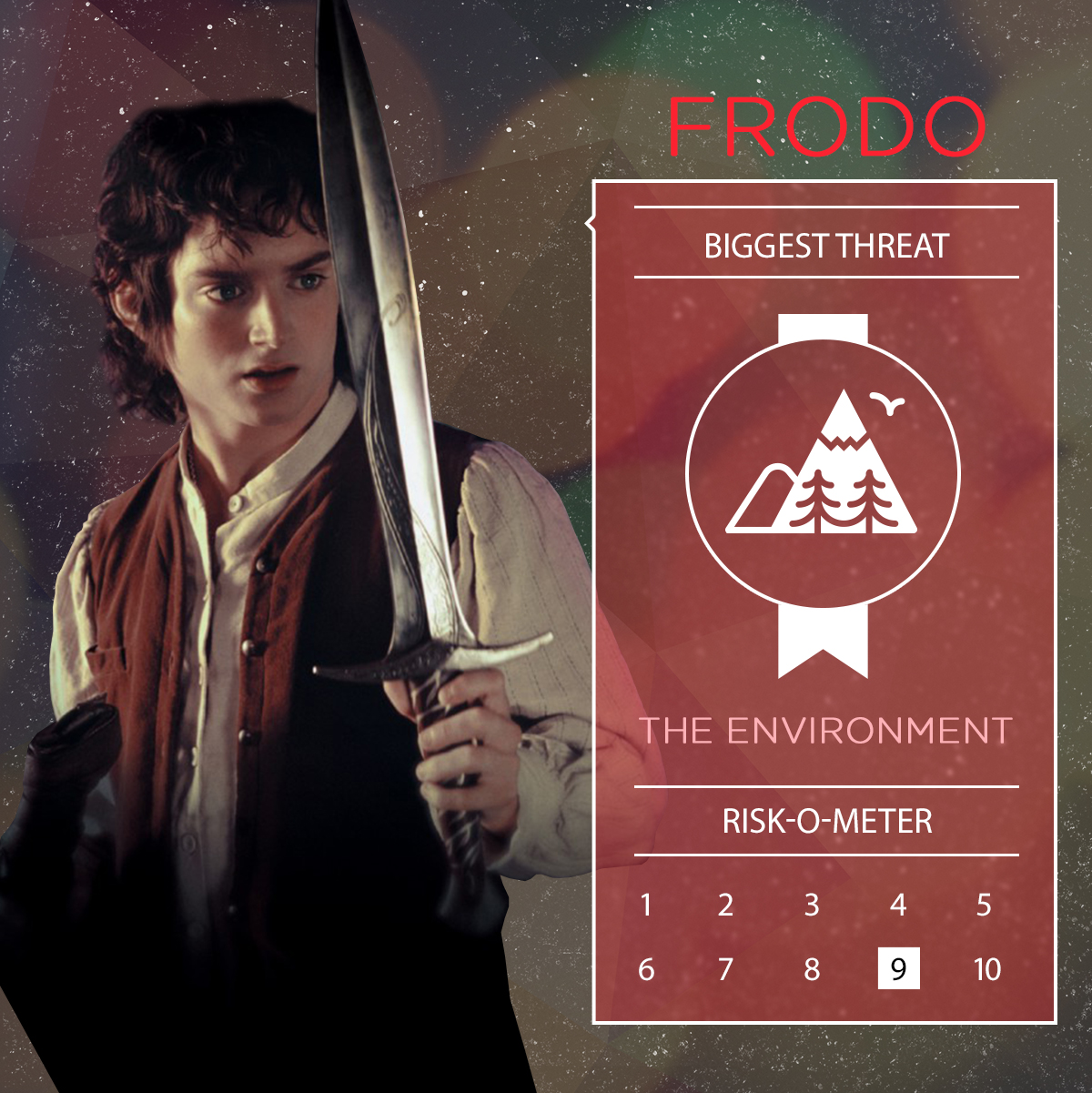 Contributed by Fortress of Solitude

“Frodo Baggins, a hobbit from the Shire, is most renowned for being the best friend of Samwise Gamgee and the Ring-bearer in J. R. R. Tolkien's ‘The Lord of the Rings Trilogy’.”

“In order to save Middle-earth from the evil lord Sauron, Frodo is petitioned by Gandalf to take The One Ring to Mordor and cast it into the fires of Mount Doom. Beginning his journey on September 23, 3018 and travelling by foot, he sets off on a daunting trip across the vast landscapes of Middle-earth. He is joined by Samwise, Merry, Pippin, Aragorn, Gandalf, Boromir of Gondor, Legolas of the Woodland Realm, and Gimli of the Dwarves.”

“Frodo survived nearly 200 days of walking in Middle-earth’s most dangerous places and encountering the most dangerous people and creatures. Setting off from Bag End in Hobbiton, he was hunted by the Nazgûl while travelling to Bree, stabbed in the shoulder with a Morgul-blade in Weathertop, nearly drowned, constantly got lost, regularly defended himself and often narrowly escaped certain death. The wound he sustained from the Morgul-blade never fully healed and left Frodo unable to settle back into his life in the Shire.”

“Frodo would have benefitted greatly from Life Insurance. He would've had peace of mind that his loved ones, which include Bilbo and his cousins, once removed, Meriadoc Brandybuck (Merry) and Peregrin Took (Pippin) would be taken care of if he didn't survive the dangerous quest.” 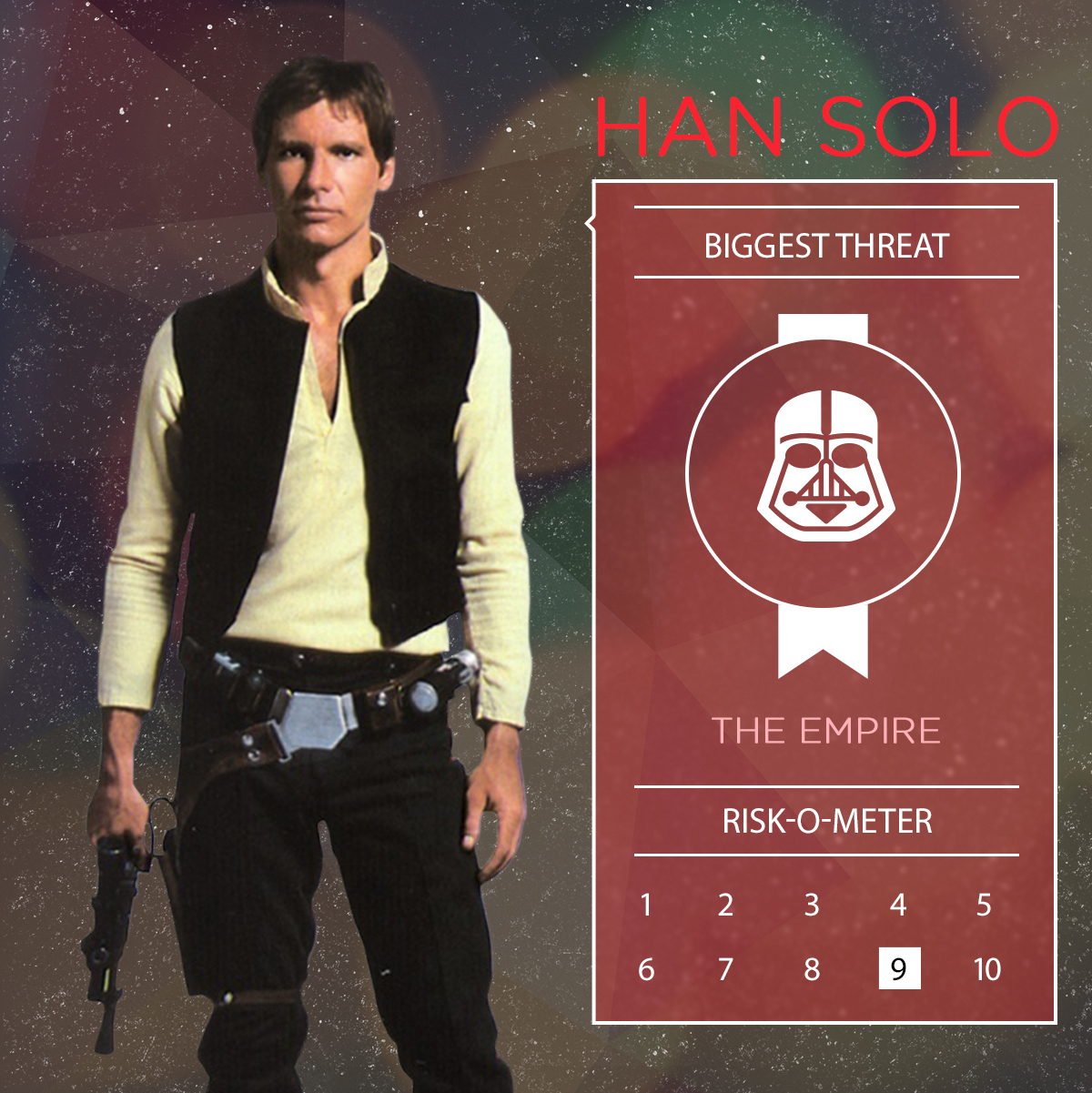 “This dashing, 'shoot-first-ask-questions-later' space captain and occasional cargo smuggler had the ultimate life. Solo got to travel all over the galaxy with his best friend and walking hairball, Chewbacca, in the fastest hunk of junk in the solar system, the Millennium Falcon.”

“The Millennium Falcon was hired by Obi-Wan Kenobi and Luke Skywalker to take them to Alderaan. Solo and Chewbacca accompanied them on their journey.”

“Solo had an incredible tendency to get into trouble with the kind of people you do not want to get into trouble with. On the run from the galaxy gangster Jabba the Hutt, hunted down by the dangerous bounty hunter Boba Fett and transporting Obi-Wan Kenobi and Luke Skywalker on the Millennium Falcon, Han Solo might have just bitten off more than he could chew.”

“With a good Life Insurance policy Han Solo would’ve made sure that he paid off his debt to Jabba after his death. It could've also allowed his faithful companion Chewbacca to retire from the dangerous world of Jedi smuggling and live the simple life amongst his Wookiee friends.” 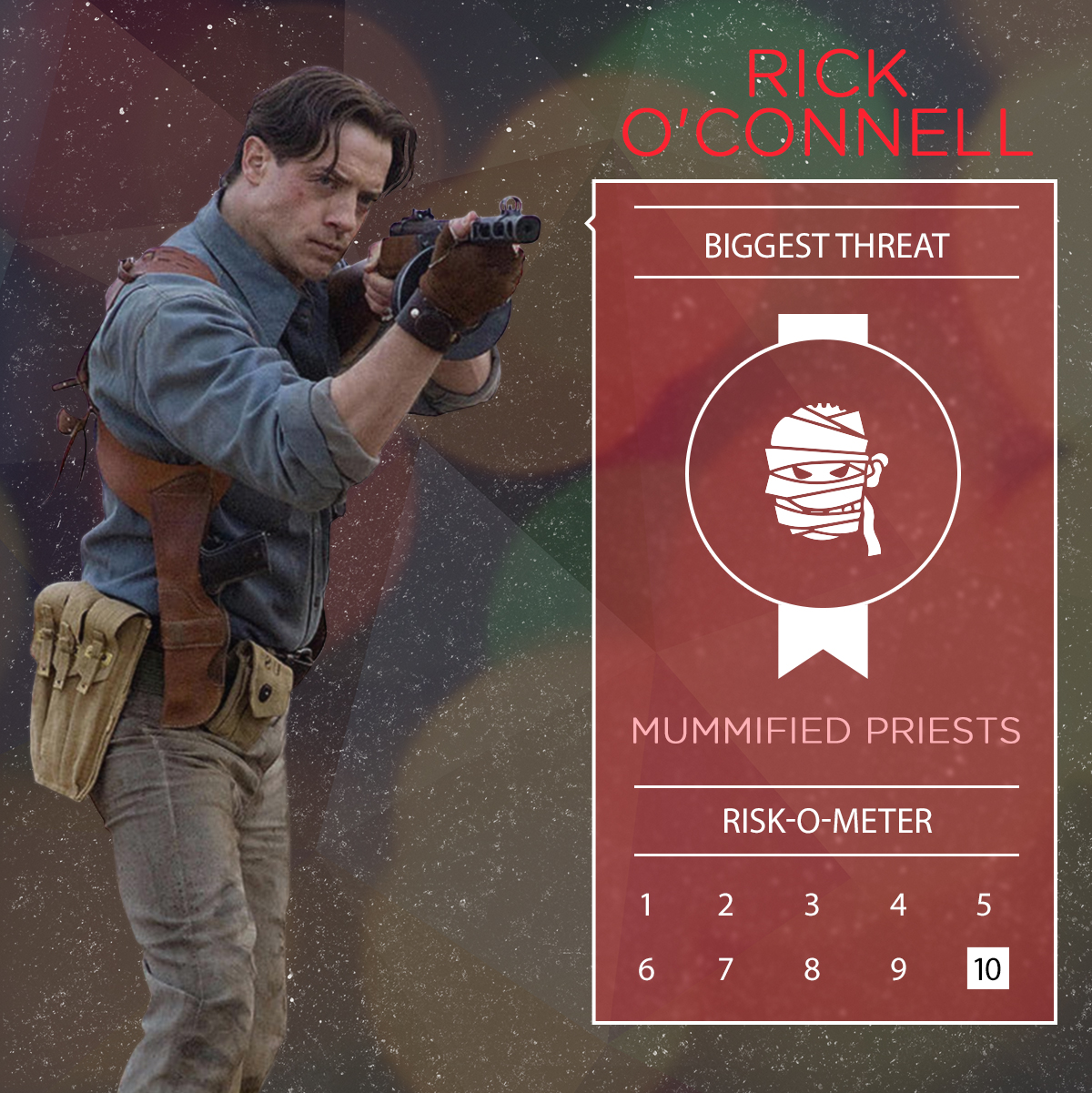 “Rick O'Connell spent a part of his life in an orphanage where he got a mysterious tattoo that branded him as a Medjai (a guardian of mankind). He later became an adventurer and Colonel of the French Foreign Legion. Rick married Evelyn Carnahan whom he met and fell in love with during his first encounter with Imhotep, the high priest. They had a child named Alex, a mischievous boy who shared in his parents' many adventures.”

“After an agreement with librarian turned archaeologist Evelyn, Rick leads her and her brother Jonathan across the vast Egyptian desert to Hamunaptra, the lost City of the Dead. There, the party discovers the Book of the Dead during an excavation and unintentionally awakens the mummified high priest Imhotep. Pursued by Imhotep, the group flees to Cairo where they are forced to go on a quest to prevent Imhotep from taking over the world.”

“Even before his encounter with mummified priests, Rick faced death when he served in the army and was nearly hanged in prison before being set free by the warden. During his adventures at Hamunaptra, he not only had to combat the evil and all-powerful Imhotep and his undead servants, but flesh-eating beetles, the ancient plagues of Egypt and an army of Medjai warriors as well.”

“Rick's exploits had an effect on his health and endangered his life on many occasions. Should he have been killed or injured during his adventures, a Life Insurance policy would've ensured that his wife Evelyn and son Alex was financially secure for the future.”

You may not be dodging bullets or encountering evil creatures like our movie heroes do, but if there's one thing the plot of these movies suggest it is that life is full of surprising twists and turns. And, although our heroes didn't have a comparison website at their disposal, you can easily compare quotes from a range of different Life Insurance providers through Hippo.co.za and prepare yourself for life's uncertainties. Next, read our Life Insurance is Series-ly Important article to see which TV series characters we think should have had Life Insurance.

Disclaimer: All rights reserved. Hippo.co.za claims no ownership of any of the copyrighted imagery featured in this article. Each character and their image is the sole property of their owners and partners, respectively.