This Is How the Brexit Could Affect You

Breaking news this morning has the UK voting to implement a British exit (or Brexit) from the European Union (EU), causing shock across the world. The voting took place yesterday with the results published early this morning. Here’s how they looked: 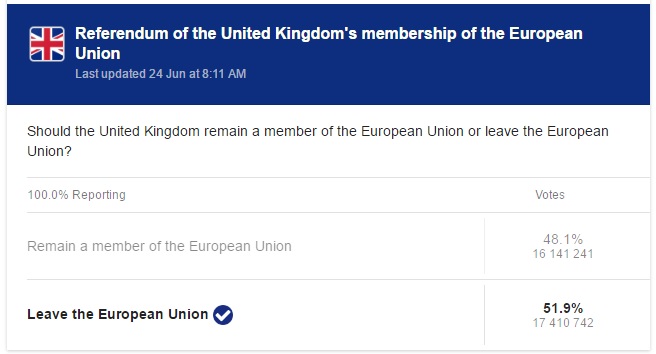 In an extremely close vote, and judging from the Facebook posts of many UK citizens this morning, a lot of people aren’t happy about it. The expected also took place this morning with Prime Minister David Cameron (who led the movement to remain in the EU) tendering his resignation. In a speech outside 10 Downing Street he said: “The British people have voted to leave the EU and their will must be respected. This will require strong, determined and committed leadership. I think the country requires fresh leadership. I do not think I can be the captain to take the country to its next destination”.

Unsurprisingly, the Pound Sterling took a hit this morning, plummeting to a 30-year low against the Dollar by losing 10% of its value within hours. Share prices of major institutions are also dropping at an alarming rate. It’s too early to know the full impact this will have on us but here are a few key insights for the moment:

According to the Sunday Tribune, several days ago Finance Minister Pravin Gordhan said the UK pulling out of the EU would “complicate life” for South Africa. “It may not immediately impact negatively, especially on trade, but the uncertainty could have a serious impact on us as a country”.